The draws have been made and Carlow has an all-Leinster affair in the opening round of Division 4B.

Carlow ladies football team get their national league campaign underway with a home game against Offaly on the 23rd of May.

The draws have been made and Carlow has an all-Leinster affair in the opening round of Division 4B.

They have a bye for the second round on the 30th of May but they travel to face Limerick then in round 3 on the bank holiday weekend on the 6th of June.

The semi-finals of the competition are down for the 12th/13th of June with the finals then on the 26th/27th of June. 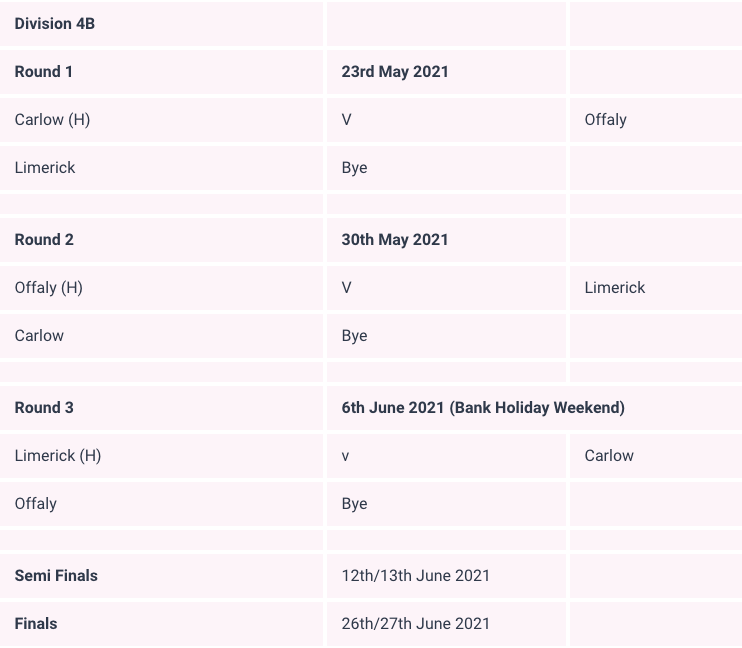 The Rebelettes, who won the top-flight crown in 2019, is also pitted with TG4 All-Ireland Senior Champions Dublin in Division 1B – with the counties set to meet in Round 2 of the League in an eagerly-anticipated clash.

Another Munster outfit, Waterford, is the fourth team in Division 1B, with Donegal, Galway, Mayo, and Westmeath set to do battle in Division 1A.

The same semi-final principle will apply across the divisions, while the bottom-placed teams in each group, with the exception of Divisions 4A and 4B, will take part in relegation play-offs.

Divisions 1, 2, and 3 will each see one county relegated, with the winners of the Finals in Divisions 2, 3, and 4 earning promotion.

Dublin, the four-in-a-row TG4 All-Ireland Senior winners, will commence their 2021 Lidl NFL campaign with a home fixture against Waterford, who they defeated in the 2020 Championship.

There will then follow a two-week break ahead of the Lidl National League Finals – to be played on the weekend of June 26/27.